Here is the second instalment of my food experiences in Amritsar. In case you missed the first part, click here.

At the end of part 1, we were scarfing jalebis & gulab jamuns at Gurdas Ram, located in what is aptly called the Jalebi Wala Chowk. Right next to Gurdas Ram was a street vendor selling saatpuda – flaky puffs with a savoury filling, served with a sweet and sour chutney. Try it out. 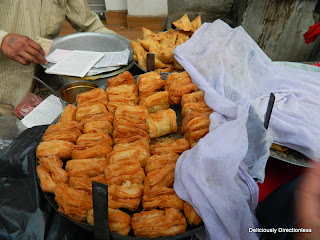 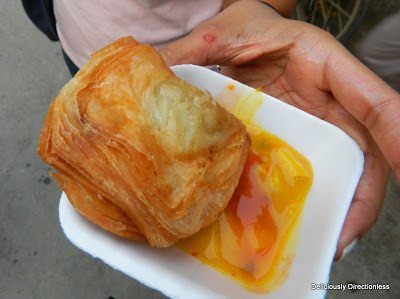 As we continued our heritage walk, we saw several street vendors selling moong dal laddoos – savoury dumplings served with a mix of spiced carrot and radish slices. We had to try them out, of course. They were deliciously warm and spicy. 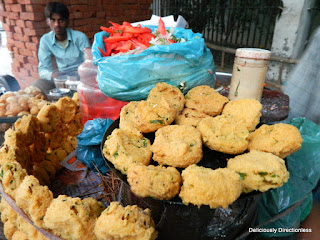 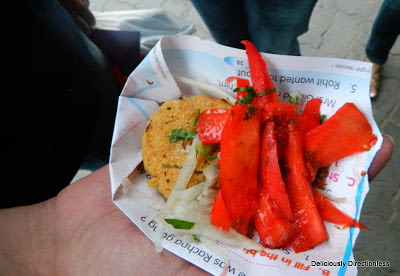 There were other vendors selling a huge variety of sweets and savouries, but I don’t think our stomachs would have withstood the onslaught! 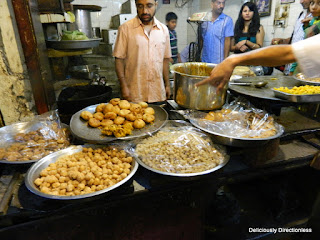 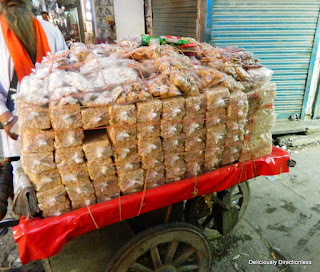 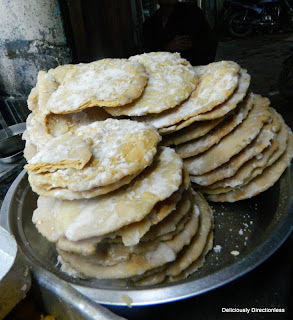 For dinner, we decided to pack stuff. We, the meat-eaters, picked up some mutton (goat’s meat, in India) curry from Bhajan da Dhaba, which is tucked away in the bye-lanes of Amritsar; I’m not sure I’d find my way to it again! Best ask a local... 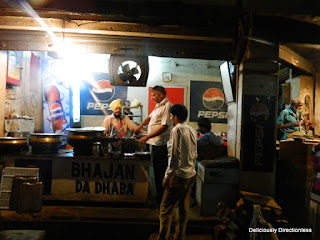 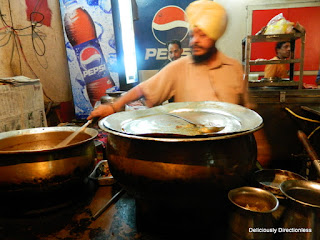 Our vegetarian friends picked up black daal, rice and paranthas from the third dhaba on the ‘circuit’ – Brother da Dhaba (right next to Bharawan da Dhaba) Both dhabas were apparently owned by the same family and then split - see fellow foodie Caramel Wings' comment below. Again, it looks like a restaurant; food is decent enough. But my dhaba vote goes to Kesar da Dhaba (see earlier post)! Incidentally, most dhabas, including these three, serve only vegetarian food.

I almost forgot about this little detour – we had gol gappas (pani puri) at one of the street vendors near the Golden Temple. Very under-whelming; the pani puri in Mumbai is far better and of course nothing beats the puchkas of Kolkata!
The next day (and the last day of our Amritsar sojourn) we headed to Maqbool Road, since we had yet to try the famed Amritsari kulchas. We stopped off at a non-descript dhaba and ordered them. The kulchas came with some chana masala and a chutney with onions (which, incidentally, was delicious). The kulchas were yummy and topped with enough butter to last a week! 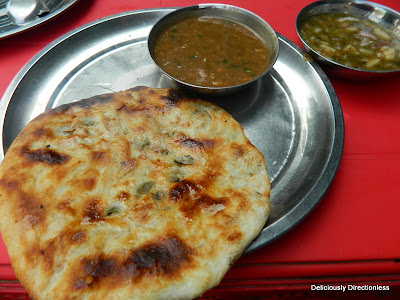 That evening, we headed to the Indo-Pak border at Attari (Wagah Border) to witness the 'lowering of the flags' ceremony. On the way back, we stopped at a restaurant Sarhad, which specialises in Indian and Pakistani cuisine. So we tried some Lahori items such as chapli kebabs (succulent and flavourful), Nihari Gosht (thick gravy with some well-cooked mutton pieces) and Lahori naan (similar to the Indian one, but it’s topped with black sesame seeds). And some lassi, of course, but that was just about OK.


We came back to the Golden Temple at night (to witness the closing ceremony) and en route I had some kulfi falooda from a street-side shop, despite the fact that I was stuffed to the gills! 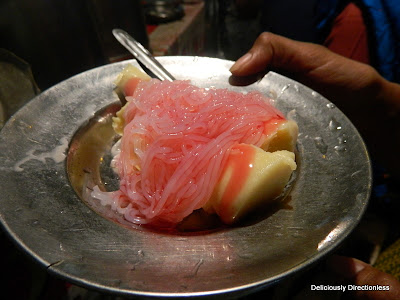 And thereafter, we headed to the Temple to partake of the langar (community kitchen)! This is a fantastic practice – the temple provides a free meal to anyone (irrespective of religion or any other differentiator) who wishes to eat some simple, but delicious fare. The kitchen is open 24X7 and feeds more than 75,000 people EVERYDAY! But more on that later... (Update - read my feature on the langar at the Golden Temple, published in National Geographic Traveller, June 2014 issue) 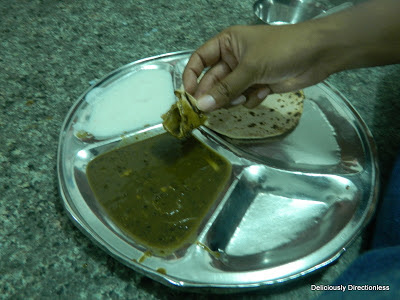 I had no appetite whatsoever, but the husband and our friends all ate at the langar, and raved about the food – kind of made me wish that I had skipped the kulfi falooda. Well, another reason to go back to Amritsar! When are you planning your trip?